It was 100 years ago, on March 20, 1916, that Don Marquis added a fanciful bit of filler material to his daily newspaper column in The Evening Sun. He claimed that a cockroach had crawled onto his typewriter the night before and left a message by diving on the keys, one at a time. Many more messages would follow from the labors of Archy the cockroach, including wild tales of a neighborhood alley cat, Mehitabel. It was brilliant stuff, and it’s still with us today. Let’s celebrate!

Plans in New York City include performances of actor Gale McNeeley’s one-man show, “Archy and Mehitabel”; a walking tour of New York’s old Newspaper Row on Sunday, March 27; and a special gathering of Marquis fans on the evening of Tuesday, March 29, at Jimmy’s No. 43, a bar/restaurant in the East Village, where tales will be told, Archy poems will be sung, and toasts will be raised to Don Marquis, Archy and Mehitabel.

Further events and exhibits will take place throughout 2016, all under the banner of archyFest! See below for event details:

Please join us for a walking tour of Don Marquis’s old haunts along New York’s Newspaper Row on Sunday, March 27. Newspaper Row includes Park Row and the area surrounding New York City Hall in Lower Manhattan. We will visit the sites of the old Sun and New York Tribune offices on Nassau Street; the building where Don created Archy and Mehitabel; the former New York Times building, where Don was a regular at the tavern in the basement; and the last home of The Sun, which is still flanked by an ancient brass clock and a thermometer bearing the Sun motto, “It Shines for All.”

The walk (very easy) starts at noon and will take about an hour, and it will end with a drink and a toast to Don at a nearby tavern. Please meet at the Benjamin Franklin statue at the intersection of Park Row and Nassau and Spruce streets. The walk will be led by John Batteiger, creator of the DonMarquis.com website and the Don Marquis page on Facebook. There is no charge for the walk, but Batteiger won’t complain if you insist on tipping him.

We have reserved the back room at Jimmy’s No. 43 on the evening of Tuesday, March 29. The address is 43 East 7th Street (downstairs), between 2nd and 3rd Avenues, down the street from McSorely’s Old Ale House. We will gather in the bar area after 8 p.m. and move into the back room at 9.

Your host, John Batteiger, has been digging up arcane facts about Don Marquis and Archy and Mehitabel for 20 years, and he will do his best to keep his fascinating and laugh-filled anecdotes as brief as possible (no promises!). With any luck he will have laryngitis, and we can quickly move along to snippets of Gale McNeeley’s “Archy and Mehitabel” show and a selection of Archy poems and sketches performed by Kathy Biehl and Seth Sheldon, stars in the upcoming New York production of the Marx Brothers musical “I’ll Say She Is.”

Did you say “party favors”? Sure, we’ll have some! And good times, too. Please join us! There will be no cover charge for the event, but we will pass around a hat if all goes well. There is a cash bar, and Jimmy’s offers a full restaurant menu. Reservations are not required, but they are requested so we can get a ballpark head count. Send email to John Batteiger at johnbatt@me.com. When all else fails, call him at 415-515-6174.

As Mehitabel says, “Cheerio my dearios!”

And now for some background material (a.k.a. fun stuff). Click on the paragraph below for a look at Archy’s first appearance in print, on March 29, 1916:

Archy’s looks have changed a bit over the years, as shown below. The first illustration to show Marquis’ “insignificant and journalistic insect” appeared Sept. 11, 1922, in a half-page advertisement in the New York Tribune that heralded the arrival of Don Marquis’ column from the rival Sun. The images surrounding it, starting from the top-left corner, are: a scene from “Shinbone Alley,” a full-length animated movie directed by John D. Wilson and released in 1971 by Fine Arts Films; the classic Archy by George Herriman, first seen in a 1930 edition of “archy and mehitabel”; an illustration from the June 5, 1926, issue of Collier’s magazine; a suave Archy drawn by illustrator Paul Hostetler in 2009; Archy by Edward Gorey, from the October 1986 issue of The Atlantic magazine; an illustration from the July 22, 1933, issue of Collier’s magazine; a squib from the January 14, 1950, issue of The New Yorker magazine; Archy as drawn by Isaac Cates in 2012 for his Satisfactory Comics blog; and lastly, a relaxed Archy drawn by Ed Frascino for “archyology” (University Press of New England, 1996), the first new compilation of Archy and Mehitabel stories in nearly 60 years. 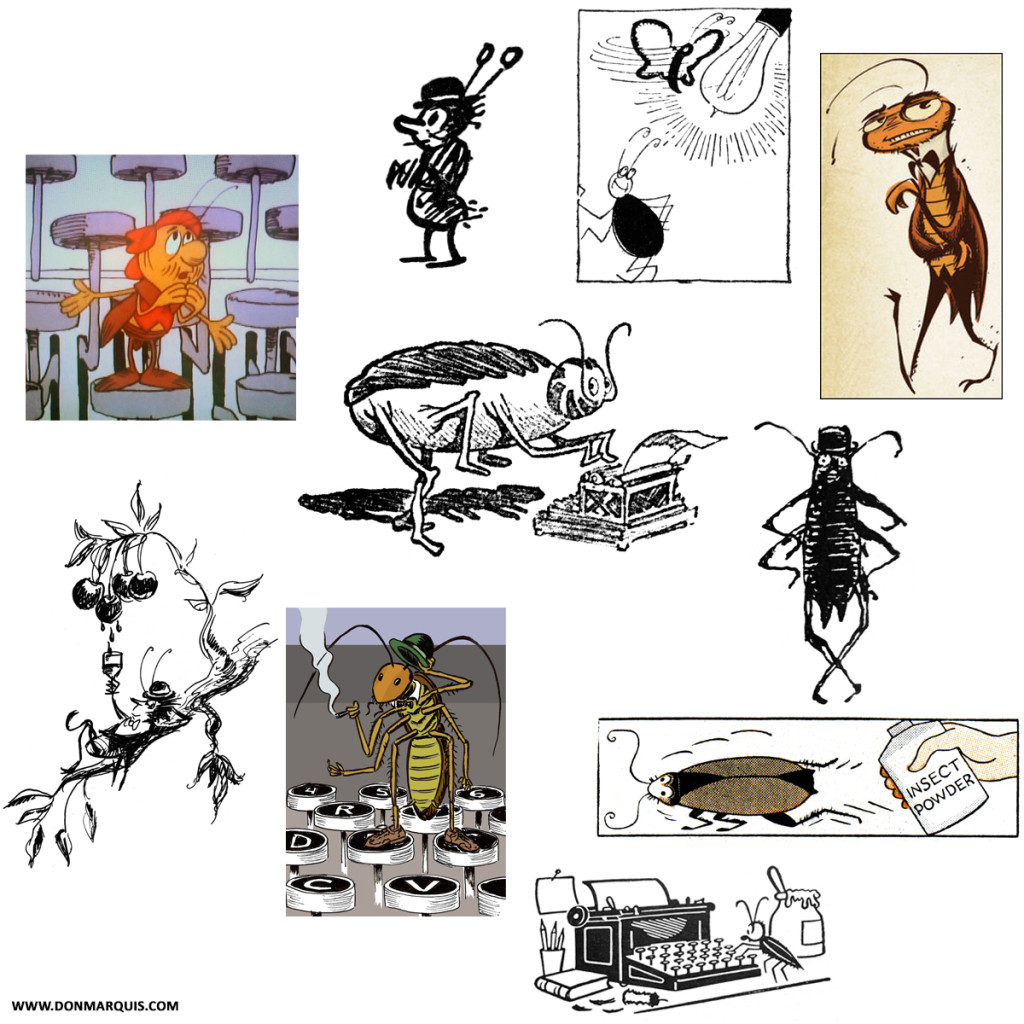