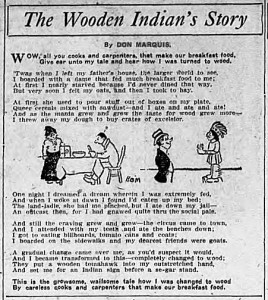 Another forgotten bit of silliness:

In January 1910, Don was settling into his first solid newspaper job in New York City after weeks of frustration. He had arrived from Atlanta barely a month earlier (on Thanksgiving day) and assumed that one of the big New York dailies would instantly recognize his talent, if not his name. He had been a big deal down in Atlanta, after all: associate editor of Joel Chandler Harris’ Uncle Remus’s Magazine and an up-and-coming poet published in a dozen other magazines with national readership.

But New York was unimpressed. An expected offer from the Herald never came, and a tryout at the Tribune ended bitterly. So did a brief stint at one of the news services there. Desperate for work, Don submitted freelance pieces to all sorts of publications, including a poem poking fun at recent events that appeared in the February 1910 issue of Mother Earth, an anarchist magazine edited by Emma Goldman.

By January, however, things were looking up. A friend had helped Don get a job on the rewrite desk of the New York American, Hearst’s morning daily, and its editors agreed to pay him extra for additional light fare that they ran on a feature page — with Don’s byline.

“The Wooden Indian’s Story” is one of those pieces. Like much of Don’s later work, humor is a veneer on news of the day — in this case revelations of breakfast cereals being routinely adulterated with sawdust filler. The poem ran in the American on January 17, 1910, and was then syndicated to newspapers across the United States via Hearst’s news service. Don’s friends in the South got a chance to read it when the poem appeared January 22, 1910, in the Atlanta Georgian and News (the source of the image here).

Don was on his way, or so he thought. “I began to be a little known in New York,” he wrote years later. “I was making some pretty good money — for me — what with my salary and this extra stuff. I was doing the kind of work I wanted to do; I was getting a pat on the back almost daily from some of the important people on the paper.”

And then fate intervened. Without explanation, he was fired after just a few months on the job.

“I never ask why I have been fired,” he would write. “When I get fired I just go away from there and let it go at that. The result is always, for the moment, so much more immediately interesting to me than the cause.”

Don’s wife, Reina, was also a talented writer, and together their freelance work got them through the next several months. By the end of the year Don was on the staff of the Brooklyn Daily Eagle, and in January 1912 he moved to the New York Evening Sun. But we’ve gotten ahead of our story. In January 1910, “The Wooden Indian’s Story” carried Don’s hopes and dreams of a new life in New York. The poem has never been published since it first appeared 103 years ago; it’s time for another look.

Now all you cooks and carpenters, that make our breakfast food,
Give ear unto my tale and hear how I was turned to wood.

’Twas when I left my father’s house, the larger world to see,
I boarded with a dame that fed much breakfast food to me;
At first I nearly starved because I’d never dined that way,
But very soon I felt my oats, and then I took to hay.

At first she used to poor stuff out of boxes on my plate,
Queer cereals mixed with sawdust – and I ate and ate and ate!
And as the mania grew and grew the taste for wood grew more –
I threw away my dough to buy crates of excelsior.

One night I dreamed a dream wherein I was extremely fed,
And when I woke at dawn I found I’d eaten up my bed;
The land-ladie, she had me pinched, but I ate down my jail –
An outcast then, for I had gnawed quite through the social pale.

And still the craving grew and grew – the circus came to town,
And I attended with my teeth and ate the benches down;
I got to eating billboards, tomato cans and coats;
I boarded on the sidewalks and my dearest friends were goats.

A gradual change came over me, as you’d suspect it would,
And I became transformed to this – completely changed to wood;
They put a wooden tomahawk into my outstretched hand,
And set me fore an Indian sign before a se-gar stand.

This is the gruesome, wailsome tale how I was changed to wood
By careless cooks and carpenters that make our breakfast food.

(Editor’s note: The image from the Atlanta Georgian and News reveals several typographical errors in the syndicated version, beginning with the very first word. In the original version, published in the American, the first word is “Now,” not “Wow.” Proof that typos have long haunted newspaper copy!)