It was 99 years ago today — March 29, 1916 — that Archy the cockroach first spoke to the world. Don Marquis had come into his office at The Evening Sun earlier than usual and discovered “a gigantic cockroach jumping about upon the keys” of his typewriter. 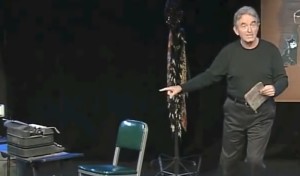 Gale McNeeley as Archy. Click the photo for a link to Gale’s performance.

“He did not see us, and we watched him,” Don wrote in his newspaper column that day. “He would climb painfully upon the framework of the machine and cast himself with all his force upon a key, head downward, and his weight and the impact of the blow were just sufficient to operate the machine, one slow letter after another. He could not work the capital letters, and he had a great deal of difficulty operating the mechanism that shifts the paper so that a fresh line may be started.

“We never saw a cockroach work so hard or perspire so freely in all our lives before. After about an hour of this frightfully difficult literary labor he fell to the floor exhausted, and we saw him creep feebly into a nest of the poems which are always there in profusion.”

It was the first of hundreds of stories, poems, japes, jests and epigrams by Archy that would appear in Don’s writings over the next 20 years, often accompanied by comments from Mehitabel, an alley cat of questionable morals and impeccable taste. Explore this website for much more on Archy and Mehitabel, and about Don Marquis himself.

Also, check out actor Gale McNeeley’s retelling of Archy’s first appearance, via YouTube video. Gale is a marvelous talent, based in Santa Maria, Calif., and has performed his one-man (one-cockroach?) show across the United States.

Today marks the start of a busy year for fans and friends of Don Marquis, and Archy and Mehitabel, leading up to Archy’s 100th anniversary next year. Please visit this site regularly for news of upcoming events.

As Mehitabel would say, cheerio my dearios!

This website celebrates the life and writings of Don Marquis, a New York newspaper columnist, humorist, poet, playwright and short-story writer in the early decades of the last century. He won early fame as the chronicler of the Old Soak, a pickled foe of Prohibition, and lasting fame as the beloved “boss” of a cockroach wise beyond his years and an alley cat dancing through her ninth life: the immortal Archy and Mehitabel.

DonMarquis.com holds the largest collection of Marquis material anywhere outside of a library (a really big library), including sketches, poems and photos that haven’t been published in 100 years. Read and enjoy and explore. Click on the pics to see larger images, and click on the links for rich content elsewhere. And if you have a story to tell, or you don’t see your favorite Archy sketch here, please send email.