Here are publicity photos of Eddie Bracken and the inimitable Carol Channing taken during the studio recording of “archy and mehitabel: a back-alley opera,” a 1954 concept album by writer Joe Darion and composer George Kleisinger. 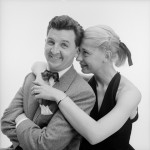 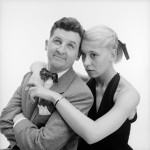 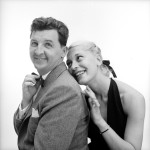 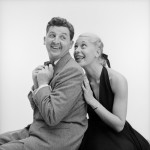 Darion and Kleinsinger produced the album (Columbia ML 4963) and staged a one-night performance at New York’s Town Hall theater in December 1954 to draw attention to their new work, but it took another two-plus years before the renamed “Shinbone Alley” finally premiered on Broadway as a full-cast musical production. The Broadway show had been partly rewritten by an up-and-coming comic talent, Mel Brooks, and starred Bracken and Eartha Kitt. (Channing was pregnant when the show was being cast.) “Shinbone Alley” ran for only 49 performances, but several songs remained in Kitt’s repertoire for the rest of her life.