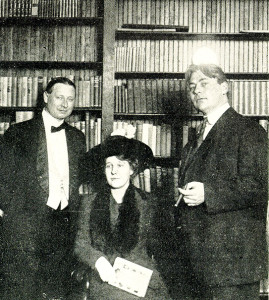 Doubleday sent copies of the photograph to both Butler and Marquis, and a short time later it reported their separate responses in a statement it gleefully released to newspapers across North America. The following exchange was published in the March 2, 1912, editions of The Toronto World, with comments first from Butler, then Marquis.

I have received the photograph entitled “The Mephistophelian Waiter, the Lady and the Saint,” and have looked at it. I have only one complaint to make.

God — and my forefathers — are doubtless to blame for my face, and my tailor for my clothes, and my willing facial muscles for my satanic grin, but why, oh! why did you sneak my halo away from me and hang it over Don Marquis’s mussy hair? Any one can see that my 6 1/4 halo is a misfit on his 7 3/4 head. It looks like a cheap hand mirror when he wears it, or like a bright, but small thought lost in his hair jungle.

I am sorry this happened. I don’t like to lend my halo to anyone, and when I pose with a beatific smile, and with my glossy hair and glossy face all prepared to reflect the shining rays of my halo, and then find the halo has been sneaked away from me and stuck on another man, on whom it is a misfit, I am pained, yes, by golly, I am pained.

Thank you for the picture.

That is a halo. It hasn’t anything to do with genius (if any) but denotes virtue.

I am sorry that you have started this alarm clock theory. I can see no evidences of an alarm clock myself.

But on the contrary it has always been known in my family, and among my close friends, that I had a halo. When I was a kid at school the teachers used to notice it. Where the customary stunt was to show your sore toe for a bite of an apple, I always showed my halo to the other boys. As I grew older, and began to take the girls home from church sociables and spelling bees, it got to be a nuisance, however; it would shine over the hammock on the darkest summer evening. Of course it was a comfort to any parent to know that the young man sitting in the hammock with her daughter was a young man who had a halo; but it was inconvenient for me, at times; I never could get any privacy; other boys could steal watermelons, for instance; but I was always doomed to virtue; my halo marked me; but for that I might have been a successful chicken thief. It led me into a terrible adventure one time, however. When I was a stripling I fell, one night — I know not how — into the company of a number of rude and drunken roisterers, two of them at a time would hold me while the others tried to blow the halo out; their alcoholic breaths caught fire — in a moment we were all surrounded by a sheet of flame — the situation was truly desperate — but I summoned all my presence of mind and cried out — (To be continued in our next).