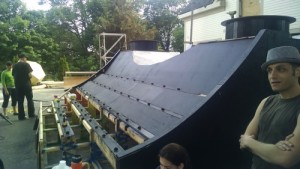 UPDATE: The Blunderwood folks have reached their Kickstarter goal of $5,000, but they now have a “stretch” goal of another $3,000 to add gold-leaf lettering to the typewriter and purchase a more powerful projector. The deadline is June 27. And make plans to see the Blunderwood in Boston, July 25-26!

Archy and Mehitabel are the inspiration for a whimsical (and huge!) public art project coming this summer to a park in downtown Boston – and then to the Burning Man festival in Nevada.

A group of artists, welders and carpenters who call themselves the Cat and the Cockroach Collective are building a 24-to-1-scale model of a 1927 Underwood Standard portable typewriter, The reimagined Blunderwood Portable will be 20 feet square and 8 feet tall, with interactive keys able to spell out personal messages projected on an oversize sheet of paper when walked upon.

“Working alone or together, people can share stories of their daily adventures, love notes or newly created poems writ large on the big screen,” says lead artist Jason Turgeon, in a fundraising video.

The typewriter will be displayed starting July 25 in Boston’s Rose F. Kennedy Greenway before traveling to Burning Man.

The Blunderwood project was featured in The Boston Globe on May 28, and a fundraising party is scheduled June 5 at Boston’s District Hall. A Kickstarter campaign is also under way until June 27, with a goal of raising $5,000 to help pay construction and transportation costs. Some awesome gifts are available to Kickstarter donors, including pins, t-shirts, hoodies, even keys from the Blunderwood typewriter itself.

One thought on “A New Typewriter for Archy — 8 Feet Tall!”