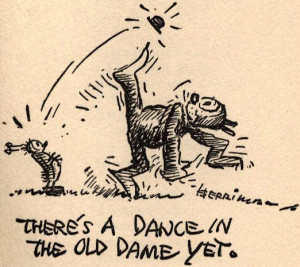 Wolfe and Woodlawn had little in common except a rebellious spirit, bold and unstoppable, and a determination to wring every bit of life out of their time on this planet. So it’s no surprise that The Times has compared both women to Mehitabel, the brassy, bawdy alley cat whose adventures were captured in Don Marquis’s classic 1927 collection of tall tales and light verse, “archy and mehitabel.” The comparisons span many decades but are nonetheless fresh.

The Times’ Margalit Fox, in her obituary of Wolfe, wrote that to be in her presence “was to find oneself enveloped by an amiable hurricane, equal parts Holly Golightly, Auntie Mame and Mehitabel, the dowager cat at the center of ‘Archy and Mehitabel,’ Don Marquis’s celebrated World War I-era column in The Evening Sun.

“ ‘Toujours gai’ — ‘Always cheerful’ — Mehitabel would declare in her dotage; ‘there’s a dance in the old dame yet.’ (Ms. Wolfe, in fact, was drawn to strays: If she found a kitten on the street she might well take it to Schrafft’s for a bite.)”

Fox’s analogy was perfect. So too was a comparison of Woodlawn and Mehitabel in a 1971 Times review of the animated film “Shinbone Alley,” by Vincent Canby. Mehitabel, Canby wrote, was “a toujours gai old dame with the soul of Cleopatra, the airs of Emma Bovary, the artistic longings of Isadora Duncan, the hangovers of Dorothy Parker’s Big Blonde, and the sexual resolve of “Trash’s” Holly Woodlawn.”

Don Marquis first wrote about Mehitabel in 1916. Nearly a century later, it’s remarkable to see that Mehitabel remains a touchstone for women such as Wolfe and Woodlawn — brave, unrelenting and thoroughly fascinating. The world needs more of them.

(Icing on the cake: Fox’s obituary of Wolfe included a link to this website’s Archy and Mehitabel page. Thanks!)