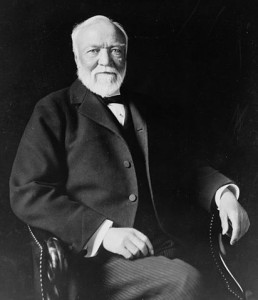 From the very beginning, Don Marquis used his newspaper column to poke fun at the rich and powerful, and proof of that claim can be found in The Evening Sun of April 12, 1913. Don’s Sun Dial column on that day wasn’t even a week old (it had debuted on April 7) when he aimed his wit at one of the richest and most powerful men in the world: Andrew Carnegie. The famed industrialist, founder of the largest iron and steel operations ever owned by an individual in the United States, was, by 1913, giving away hundreds of millions of dollars in a well-publicized rush of philanthropy. Carnegie enjoyed telling stories of his humble childhood in his native Scotland, and of the hard work and determination that brought such wealth to him and, by extension, his adopted home town, Pittsburgh — a city where the smokestacks from Carnegie’s factories turned the noonday sky dark with soot.

A Chance for Mr. Carnegie

Mr. Andrew Carnegie says, “I would have liked to be a reporter. I tried my best once in Pittsburg to get on a paper, but they wouldn’t have me.”

We are afraid we can’t promise our assistance in getting anything in the news end of a paper for Mr. Carnegie, although we hate to discourage a worthy young man who is trying to better himself. The dull season is coming along pretty soon, anyhow.

But if Mr. Carnegie will drop in to see us any afternoon from 3 to 5, with a letter from his pastor, we will outline to him an arrangement we have in mind whereby he can write short pieces for this column now and then. Let him wear a carnation in his coat lapel and look about him for an average looking sort of a person with an ordinary necktie in plain clothes, and we will know each other at once.

We have the thought of making a poet out of Mr. Carnegie. A stanza of his earlier verse floated into our notice some years ago, and we said at once: “Here is a man with a talent: if he only received proper encouragement he might get ahead in the world.” But evidently no one encouraged Mr. Carnegie. The stanza to which we refer is as follows:

Mary had a little lamb,
Its fleece was white as snow,
It followed her to Pittsburg –
And look at the d—d thing now!

The words “snow” and “now” are both to be pronounced so as to rhyme with the word “gnu.”

It will be a rather arduous apprenticeship, and for a while Mr. Carnegie will have to submit to having his best things published over our signature, but if he works hard (crushing, among other things, the slight tendency to profanity which mars the above quatrain), we will give him a start.

After that, it’s up to him.