Second in a video series. Scroll down for a link to the video.

Archy the cockroach was the embodiment of reincarnation — he had been a poet in a past life, after all, and spent his insect days tapping out verse on a typewriter. So it’s entirely within reason to speculate who might be the reincarnation today of Don Marquis.

My vote would be for Dave Barry. Like Marquis, Barry was one of the most celebrated newspaper columnists of his era, using humor to shine a spotlight on the human condition. He wrote weekly columns in The Miami Herald from 1983 to 2005 that were devastatingly funny, and he won the Pulitzer Prize for commentary in 1988 for “his consistently effective use of humor as a device for presenting fresh insights into serious concerns.” Like Marquis, he has continued writing humor to great effect after leaving the grind of newspaper journalism, with 37 books to his name at last count.

The New York Times has called Barry “the funniest man in America.” The novelist Stephen King put it another way, declaring, “While reading Dave Barry’s ‘Big Trouble’ (Putnam, 1999), I laughed so loud I fell out of a chair. Luckily, there’s a rug, so I didn’t hurt myself.” On a personal level, one of Barry’s column’s from 1985 reduces this writer to disabling fits of laughter even today, after dozens of readings. It is titled “Ask Mr. Manners” and attempts to prepare a young parent for all the horrifying atrocities in store when hosting a birthday party for a preschool child. Popular themes for a young boy’s party, according to Barry, include action figures such as He-Man, G.I. Joe, The A-Team and the always-popular “Testosterone Bob’s Hurt Patrol.”

When he was asked to recite a few lines from “archy and mehitabel,” Barry chose an excerpt from one of the funniest distillations of humor ever put onto paper: “certain maxims of archy.” His video is short and sweet. It is the second in a series of self-made videos on the occasion of the 100th anniversary of Archy and Mehitabel’s first appearance in print, on March 29, 1916 — a yearlong celebration called archyFest.

Here is his video: 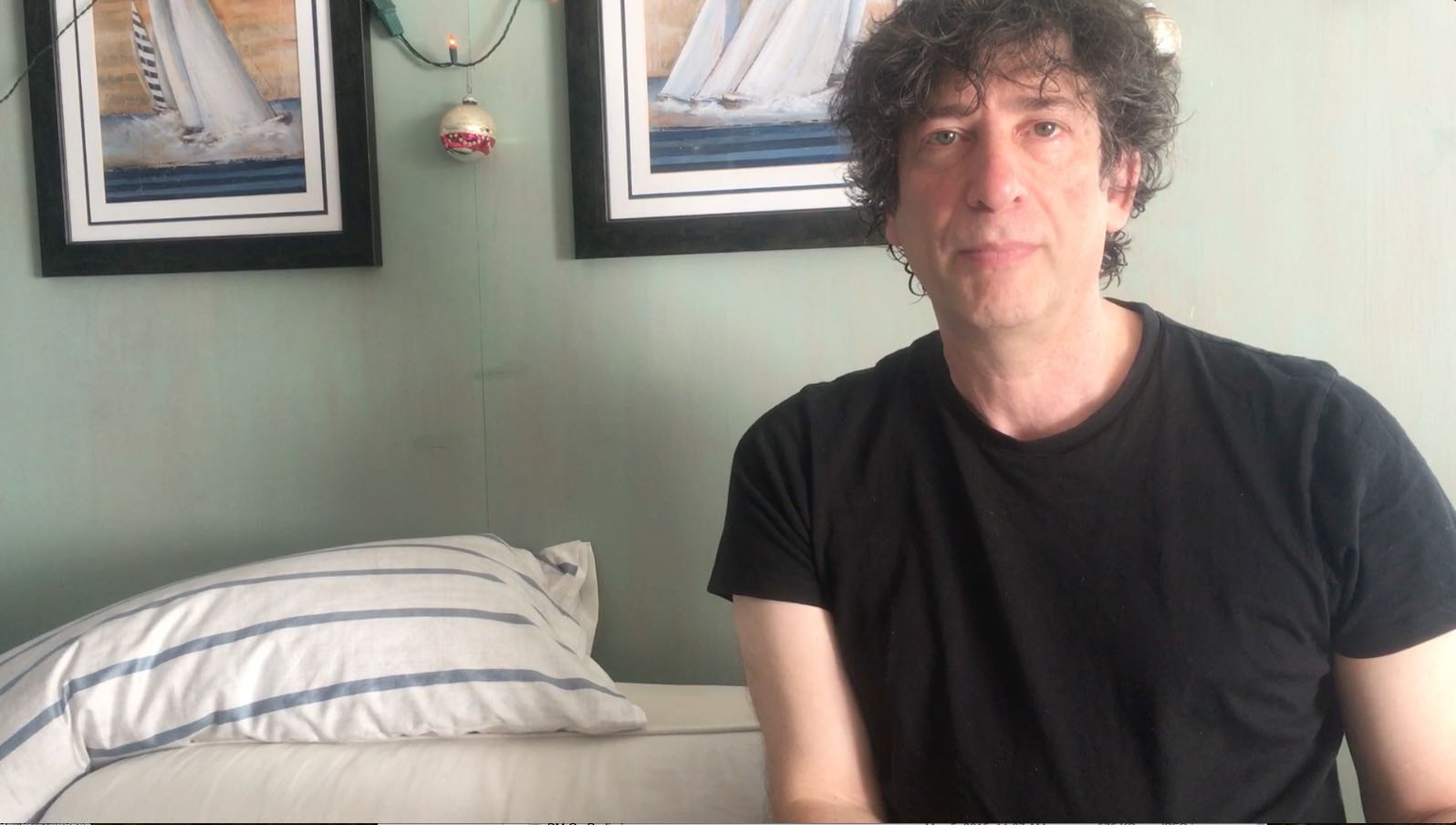 First in a video series. Scroll down for a link to the video.

Novelist and comic-book writer Neil Gaiman counts Don Marquis’s “archy and mehitabel” among his favorite books. One of his top five, in fact.

Gaiman has mentioned Marquis in several interviews over the years, and he included Marquis in a rambling and fabulous statement of beliefs in his blockbuster 2001 novel, “American Gods,” in which one of the main characters, Samantha Black Crow, declares, in part: “I believe that the greatest poets of the last century were Edith Sitwell and Don Marquis, that jade is dried dragon sperm, and that thousands of years ago in a former life I was a one-armed Siberian shaman.”

Gaiman first read “archy and mehitabel” many years ago, and it continues to fascinate him. In a 2011 Australian radio broadcast, he included it in a discussion of his five most favorite books.

“Don Marquis was an American humorist and occasional poet and newspaper journalist, and he created Archy and Mehitabel,” Gaiman said on The Book Show, aired by ABC Radio National. “Archy was a free-verse poet who, for the crime of being a free-verse poet, was condemned to be a cockroach forevermore, in every future life, and he is a cockroach who writes poems by climbing on a typewriter and jumping head-first onto the keys. And Mehitabel is an alley cat who claims to have once been Cleopatra, and Don Marquis wrote these beautiful, funny, strange, mocking, glorious little poems about Archy and Mehitabel.”

Gaiman has won numerous international awards for his fantasy writing, including Carnegie and Newberry medals, so who better to lead off a video series featuring the wit and wisdom of a world-weary cockroach and a dissolute alley cat?

A few months ago, Gaiman was one of several writers, entertainers and other public figures asked to recite a few lines from one of the Archy and Mehitabel compilations (there are six) for a series of short, homemade videos on the occasion of the 100th anniversary of Archy and Mehitabel’s first appearance in print, on March 29, 1916 — part of a yearlong celebration called archyFest. Gaiman responded to the call immediately and enthusiastically, and the video below is the result.

Given the choice to read any of more that 300 published sketches and poems, Gaiman chose an obscure but brilliant sketch, “quote buns by great men quote,” from the 1927 book that started it all, “archy and mehitabel.” He explains:

I don’t know if this is my favorite of the Archy and Mehitabel poems. I do know that I fell in love with it before I actually understood what it meant. When I was a boy at school, a ‘bun’ was a large, doughy bread roll with raisins in it that you’d be given at four o’clock at school, and it was many, many years before I discovered that a bun was also 1920s slang — for a hangover.

Here is the video:

And thanks to Neil Gaiman for his gracious help and support!