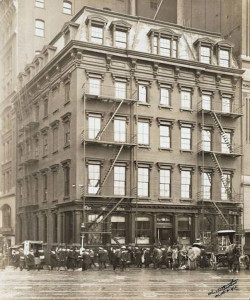 Here’s a thought that might keep you up at night: The real, live descendants of Archy the cockroach may be scurrying around the streets and alleyways and high-priced real estate of lower Manhattan at this very moment.

That’s right, Archy, the most famous insect in American literature, was based on a cockroach that once was very much alive. His home was in the newsroom of the old Evening Sun newspaper, but his real name was Erasmus, not Archy. Don Marquis revealed Archy’s origins and commented on his enduring appeal — and his frequent reincarnations — in an essay he wrote in 1934 for The Cornell Daily Sun, the student newspaper at Cornell University.

“Archy crawled into my life about twenty years ago, when I was doing a daily column on the New York Evening Sun,” Don wrote. “There was a story in the news columns about a garage up town somewhere that was haunted, . . . the type-writer in the garage office would keep clicking of nights, when no one was in there. So they thought it was a ghost, which is about what a lot of garage loafers would think. It didn’t occur to any of them to put a sheet of paper in the machine and give the ghost a chance to have his say. One night they found a mouse running back and forth on the keyboard; he was the ghost.

“Why not (says I to myself) both a mouse and a ghost? A mouse inhabited by a ghost? A mouse into whose little carcass a ghost has insinuated its way? A case of transmigration? Some of the old Doc Pythagoras stuff? So I sat down and wrote what the mouse-ghost was trying to get across. Then I thought, No; a mouse isn’t good enough. Then I remembered a cock-roach I knew; a cock-roach named Erasmus, who lived behind the water cooler in the Sun news room. Erasmus was a very learned-looking cock-roach and used to crawl out from behind the cooler, when you went to take a drink of water, rear up on three or four of his hind legs, and look you over with an immense scorn, the scorn of a pundit, the scorn of a philosopher, and then back away again, leaving with you a sense of your own inferiority. But Erasmus wasn’t a good enough name for my cockroach; I made him Archy, which is a kind of peppy name, and yet ingenuous, somehow: easy to say and easy to remember.

“Archy soon developed a friendship with all the mice, rats, spiders, and other small deer, who hang around a big old building; and finally Mehitabel came along and joined the throng, ‘so many, and so many and so full of glee.’ (Class in English, look that quotation up. What! Great guns, that isn’t from Keats’ Endymion, is it? Read the whole poem and get your mind away from trash like Archy and Mehitabel.)

“The stuff caught on at once largely because of its typographical appearance. It has always been easy to do, because I never do it when I don’t feel like it. I never think when I do it, and I never plan it. There is some sort of queer vitality in it which I don’t understand myself. After I had been doing it nearly every day for a year, I got terribly tired of it, and killed Archy off; stepped on him and squashed him with the big flat foot of authority. I was surprised at the number of letters I got, after I announced his death, protesting. That showed me I had something which people wanted, for some queer reason, or for no reason, and I resurrected him. I killed him four or five times during the next ten years , but there was always a demand for his resurrection. This was easy enough to manage. All I had to do was have the soul of Archy  — the real Archy, the essential Archy — crawl into the body of another cockroach, and carry on, which he could do without missing a strophe. It was a great joke for five or six years, and one which the inspired jesters never seemed to weary of, to send me by mail dead Arches in little pill-boxes, — I get them from Maine, California, the Canal Zone, the Philippine Islands; from all over the infested world.”

Don barely changed any of the facts in his now-famous introduction to Archy, first published in his Sun Dial column on March 29, 1916, in The Evening Sun and reprinted in “archy and mehitabel” in 1927:

“Dobbs Ferry possesses a rat which slips out of his lair at night and runs a typewriting machine in a garage. Unfortunately, he has always been interrupted by the watchman before he could produce a complete story. It was at first thought that the power which made the typewriter run was a ghost, in stead of a rat. It seems likely to us that it was both a ghost and a rat. . . . And since this matter has been reported in the public prints and seriously received we are no longer afraid of being ridiculed, and we do not mind making a statement of something that happened to our own typewriter only a couple of weeks ago.

“We came into our room earlier than usual in the morning and discovered a gigantic cockroach jumping about upon the keys. . . .” 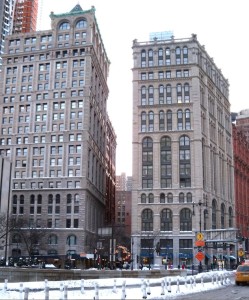 There is one more story that deserves to be told. The building where Don created his Archy character still stands, at 150 Nassau Street, but the home of Erasmus is long gone. That site today is the northeast corner of Pace University’s administration building at 1 Pace Plaza, although the address is known in history books as 170 Nassau Street.

Located across Park Row from New York City Hall, at Frankfort Street, the five-story brick building at 170 Nassau once was the home of Tammany Hall, the powerful political machine ruled by the infamous Boss Tweed. It was built in 1811 and had been home to The Sun and Evening Sun since 1868. However, by 1912, when Don joined the Evening Sun staff, it was decrepit and crumbling. Don’s good friend Christopher Morley, writing in his 1918 book “Shandygaff,” called it “Vermin Castle,” and he identified it as Archy’s birthplace.

In fact, Archy was born a block away. In July 1915 the Sun newspapers moved from 170 to 150 Nassau, at the southeast corner of Spruce Street, in the former home of the American Tract Society, a publisher of religious books and pamphlets. Erasmus was presumably left behind, and the old Tammany Hall was demolished that fall. But Don carried the memory of old Erasmus with him to 150 Nassau where, less than a year later, he gave him new life as Archy. 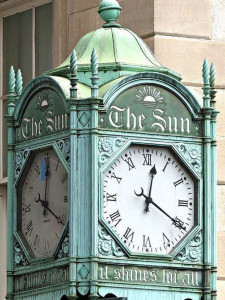 Marquis and the Sun newspapers would move again, in 1919, across City Hall Park to 280 Broadway, formerly the home of the historic A.T. Stewart Dry Goods Store. The building is still identified by a four-sided clock and a two-sided thermometer attached to the front facade, both announcing The Sun’s storied motto: “It shines for all.” This is the building that E.B. White wrote about in his classic 1949 book “Here is New York”:

“I’ve been remembering what it felt like as a young man to live in the same town with giants. When I first arrived in New York my personal giants were a dozen or so columnists and critics and poets whose names appeared regularly in the papers. I burned with a low steady fever just because I was on the same island with Don Marquis, Heywood Broun, Christopher Morley, Franklin P. Adams, Robert C. Benchley, Frank Sullivan, Dorothy Parker, Alexander Woollcott, Ring Lardner and Stephen Vincent Benet. I would hang around the corner of Chambers Street and Broadway, thinking: ‘Somewhere in that building is the typewriter that archy the cockroach jumps on at night.’ “

Today, both 280 Broadway and the old American Tract Society Building are recognized as New York architectural landmarks. The former is a now a city government office building; the latter is a luxury condominium complex where, one presumes, its notoriety as the birthplace of a literate cockroach is not mentioned to prospective tenants. 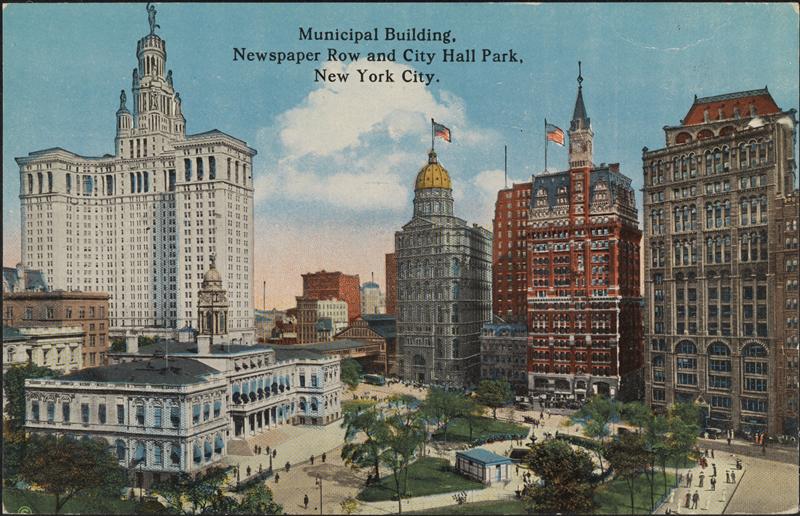 Newspaper Row, circa 1915: City Hall and the Municipal Building are at left. A golden dome sits atop the World Building, later torn down to widen the entrance to the Brooklyn Bridge. To the right, the old Sun Building is dwarfed by the Tribune Tower, both now the site of 1 Pace Plaza, and the American Tract Society Building peeks out from behind the old Times Building.