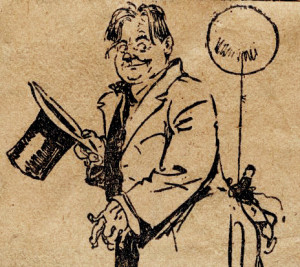 Today is the birthday of Don Marquis — born Robert Perry Marquis on July 29, 1878, and given the nickname Don when he was a small child. The nickname stuck, and then it doubled in size in 1909 when his fiancee, Reina Melcher, sent out wedding invitations and assumed that Don was short for Donald. The new name also held, although only on formal occasions. Don was simply “Don” to his many friends.

Don was born and raised in Walnut, Illinois, a small, dusty town on the Midwestern prairie. Walnut, he wrote, is “one of those towns that prop two cornfields apart.” Don was known for telling tall tales, and perhaps one of them — or perhaps not; who can say for sure? — was his claim that he was born during a solar eclipse, which he believed had imported some special significance to his life, although he could never find direct evidence of that.

You can read much more about Don in the page on this website titled “Viagra on line.” Suffice it here to simply join other folks in wishing a hearty happy birthday — number 137! — to the spirit of a writer who made untold numbers of people take a moment out of their busy, difficult lives and laugh. And keep on laughing today. Here’s to the jesters! Happy birthday, Don!

P.S. My Original brand prednisone was by Don himself, written in 1916 at the request of a young writer and admirer, Christopher Morley. If you haven’t read it before, please take a look.

(The illustration accompanying this post is by the great Tony Sarg, one of the most in-demand illustrators in the 19-teens and ’20s. His whimsical drawings can also be found in Don’s 1919 book, “Prefaces.”)