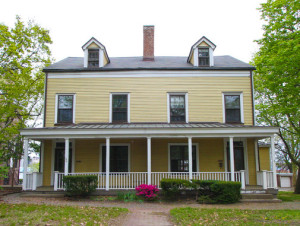 4B Nolan Park on Governors Island

A rejiggering of the calendar has moved Don Marquis Weekend on Governors Island to May 20-21, instead of the previous announced date in late July. Make plans now to visit the Empire State Center for the Book‘s summer home in the fabulous new park in New York Harbor between Manhattan and Brooklyn.

The Center for the Book, the nonprofit group behind the New York State Writers Hall of Fame, has been given one of the former officers quarters on Governors Island for the entire summer and is allowing groups representing writers, illustrators, booksellers and publishers to use the space on weekends. Besides Don, featured weekend authors include Mark Twain, Walt Whitman, Kurt Vonnegut, Dorothy Parker and Emily Dickinson.

Don Marquis Weekend on the island will include displays of his books, of course, along with photographs, letters, clippings, postcards and movie posters. We plan to show several movies — “The Cruise of the Jasper B” (1926, silent), “Good Old Soak” (1937) and “Shinbone Alley” (1971, animated) — either by projection on a wall or from an iPad. And we’re hoping to present a performance or two. (Details TK.)

Other ideas? Please join in the planning — and please consider being a volunteer on the island. It will be a fun time, with material support provided by the Don Marquis Double Scotch and Prohibition Society!

Need we mention that May 20-21 would be a perfect weekend for out-of-towners to visit New York? Make your travel plans now!