WIT AND WHIMSY: Follow this link for a wonderful birthday tribute to Don Marquis by Bill Knight, a syndicated columnist appearing in the Pekin Daily Times in north-central Illinois. It’s an excellent piece, and well-researched, with quotes from E.B. White, Heywood Broun and Stanley Walker, along with a fine biographical profile.

Yes, Archy’s name is misspelled in the column, but that’s nothing new. Archy’s name has been consistently misspelled going all the way back to 1916, just a few months after it first appeared in print. And look at any dust jacket of “archy and mehitabel” from 1930 to 1943 and you’ll see “archie” printed on the inside rear flap — an unforgivable error from Don’s publisher, Doubleday.

BIRTHDAY BASH: Don’s 141st birthday was Monday, July 29, and it was celebrated in New York with a gathering of the Don Marquis Double Scotch and Prohibition Society at Keens Steakhouse in Midtown Manhattan, one of Don’s old haunts. We are happy to report that the toast of Walnut, Illinois, was toasted in proper fashion — repeatedly — and a good time was had by all. (Click on the photo at right for a closer look.)

We have also received correspondence from several far-flung friends of the Society, both foreign and domestic, reporting that they, too, lifted glasses in Don’s honor on his natal day. Anyone with photos (or stories) to share would do the Society a favor by submitting same.

(What is the Double Scotch and Prohibition Society, you say? Follow this link to join the party.) 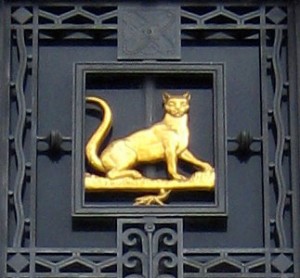 BRONZE EFFIGIES:The New York Times Book Review gave a nod to “archy and mehitabel” in its New & Noteworthy section on Feb. 3 when food writer Melissa Clark called out the carvings of Archy and Mehitabel that sit high above the entrance to the Brooklyn Public Library’s main branch at Grand Army Plaza. Clark told the story of how this bronze cockroach and cat came to be, and who Don Marquis was, and why they, and he, deserve another look today. Here’s a link to her story.

And for more on those one-of-a-kind bronze carvings, read the story we posted here in 2011.