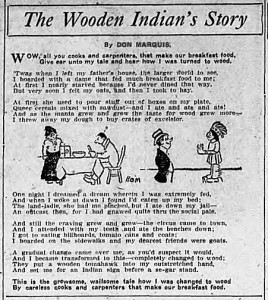 Another forgotten bit of silliness:

In January 1910, Don was settling into his first solid newspaper job in New York City after weeks of frustration. He had arrived from Atlanta barely a month earlier (on Thanksgiving day) and assumed that one of the big New York dailies would instantly recognize his talent, if not his name. He had been a big deal down in Atlanta, after all: associate editor of Joel Chandler Harris’ Uncle Remus’s Magazine and an up-and-coming poet published in a dozen other magazines with national readership.

But New York was unimpressed. An expected offer from the Herald never came, and a tryout at the Tribune ended bitterly. So did a brief stint at one of the news services there. Desperate for work, Don submitted freelance pieces to all sorts of publications, including a poem poking fun at recent events that appeared in the February 1910 issue of Mother Earth, an anarchist magazine edited by Emma Goldman.

By January, however, things were looking up. A friend had helped Don get a job on the rewrite desk of the New York American, Hearst’s morning daily, and its editors agreed to pay him extra for additional light fare that they ran on a feature page — with Don’s byline.

“The Wooden Indian’s Story” is one of those pieces. Like much of Don’s later work, humor is a veneer on news of the day — in this case revelations of breakfast cereals being routinely adulterated with sawdust filler. The poem ran in the American on January 17, 1910, and was then syndicated to newspapers across the United States via Hearst’s news service. Don’s friends in the South got a chance to read it when the poem appeared January 22, 1910, in the Atlanta Georgian and News (the source of the image here). END_OF_DOCUMENT_TOKEN_TO_BE_REPLACED